We had a nice turnout for our December meeting despite the weather.

We'll have our 1st meeting of the new year on Sunday Jan 11th down at the Como Park Pavillion again, 2-5pm. Add a comment or send me an email if you have songs you want to share with the group.

We're still on for today...

The weather is looking pretty good right now, if it takes a turn for the worse we can knock off early. Use your own judgement and stay safe.
Brian
Posted by ukulele-melee at 11:15 AM No comments:

I threw in the song "Moonlight On The Colorado" for this month and thought some of you might be interested in how I came up with this choice.

I'd never heard of the song before Thanksgiving this year. Sometime during Thanksgiving Day I was sitting with my mom and talking about the old songs we've been playing at our uke meetings.
She started humming and then singing bits of the song "Moonlight" and asking if I remembered years ago when we had a Victrola in the basement and she played this song.

Well, I don't recall ever having a Victrola and she's been forgetting things lately so maybe it was from when SHE was young rather than when I was.

Anyway, she mentioned how she used to love the song. That was enough for me, I wanted to learn the song so I could play it for my mom.

When I got home I started searching. I didn't have too much luck at first, I found a few sound clips, just bits of the song, from websites selling CD's. I checked youtube and found one clip of a young gal singing the song but not a period clip like I was hoping for. Here it is if you want to hear it: http://www.youtube.com/watch?v=zN_B-X6IM3Q

I finally found the sheet music for it at this website: http://sheetmusic.library.sc.edu/ and this is the version I uploaded in the blog link. I think this song would sound really cool on steel guitar... maybe I need a resonator uke to fake it.

Do any of you have stories behind song choices?

Hope to see a few of you next Sunday.
Brian
Posted by ukulele-melee at 8:10 PM 5 comments:

Yes, we're still planning on meeting on the 21st.

I've had 4 songs submitted and I'll add a 5th; download and print them if you're coming.
If you have any more songs to share please let me know and I'll try to post them.

I don't know all of these either, come and learn them along with us.
David has supplied links to youtube for a couple of them at the top of the pages.
If it asks for a userid/password just hit cancel and they should download.
After You've Gone
Moonlight On The Colorado
Red Roses For A Blue Lady
Shine On Harvest Moon (updated version from John)
Whispering (verses included from David)
Whispering (sheet music)

The Whispering sheet music is the same as I handed out last month, grab a copy if you want as it'll help with the melody. David's version just has chord names, plus verses mine was missing.

The changes to Shine On Harvest Moon are interesting. This is the 2nd update John sent and what he's doing is converting it to a chord melody version. I play chord melody almost all the time and can show you a few more changes to take it even farther... I'd have to TAB it out to show all of it but at the meeting I can tell/show what I mean.

Last month I think we had more fun with the "oldies" than with the Xmas tunes but we'll play whatever you bring to share, as usual.

Hope to see you there.

Keep StrumMn!
Brian
Posted by ukulele-melee at 12:51 PM No comments: 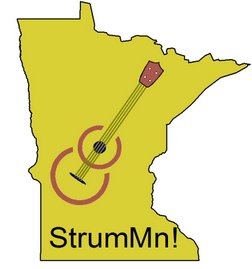